Poser is a 3d design and animation package to easily create lifelike human figures, and a few other body types, like animals and robots. The latest release of the software, Poser version 7, is published by E Frontier.

Male poser erotica
Kind of the male/gay counterpart of Renderotica.com, with poser characters and a shop. The site needs some more content, but clearly shows what the new poser G2 system can accomplish in terms of realism and atmosphere. Although they focus mainly on Poser, they also have some content created with Daz 3D. http://www.maleposerotica.com/index.php

The website of digital artist Geoff Ridgway
Some quite heavy fetish images, with a wonderful atmosphere, and some interesting usage of bondage elements & machines. 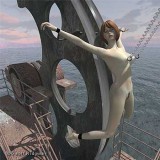