In many of his images we see the goddess, the Madonna, but this time she is not “the divine”, the untouched woman. Lanzetta’s Madonna eats her own flesh, is glazing at you with empty eyes, and her Aureole is burning in yellow fire. The disturbing story continues with the suffering of Christ, the wounded man in white, whirling in flesh and blood. It’s interesting to know that the figure of Christ is actually the artist himself, showing many similarities in appearance with the images of Jesus we know from paintings.

Besides his clearly iconographical images, he also has a large collection of work best described as haunted, or a flirtation with pain and death. Although the effect of these images is quite amazing, they would even make the most ‘cool’ people feel uncomfortable, they are not really my thing. When the body distortions reach a certain level of abstraction they become interesting again, but that’s just my opinion of course. 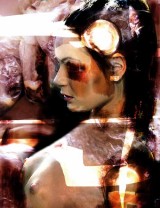