If you ever thought a girl riding a bike was hot, well here is some real sexy biker girl. Well real, nearly real, or as close as it’s getting when it comes to digital created ones. The 3D art of Steven Stahlberg is top quality 3d modeling work and he has a marvelous eye for suspense as well.

To create his 3d art he uses Maya Unlimited, one of the mayor 3d modeling programs out there. It’s used a lot in the film and game industry besides of course 3d Studio max. To do a little promotion :-) I’ll stick with Silo 3D the best moddeling program for artists out there, but it’s not a real comparison. Silo is 3D modeling only while the others have a much broader purpose. But anyway lets get back to the art of Steven Stahlberg.

He has a large portfolio on-line of his 3D artworks. A lot of them have as a general theme, watch the hot babe doing nasty stuff, like killing some invisible aliens with the largest fire blower she can handle, or riding a large metal pet. But there are romantic artworks as well, like the beautiful faery talking to the beast.

If you like 3D art and some nasty digital babes, I would really recommend to check out the art of Stahlberg on his website. 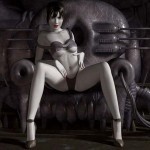 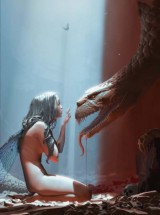