You are at:Home»Fetish Art»Exquisite Bondage Ropework of Knight
By Luca on April 30, 2014 Fetish Art

Fetish and kink are so common these days. It’s no longer shocking to see images of rope bound models in high-end magazines. You can find examples of it everywhere, and it has become almost repetitive. It can be hard to find images now that are unique, inventive, or striking. But if you are looking for the thrill and the magic of the binding of the human form, then look no further then the work of Garth Knight whose unique and intricate style of ropework along with his striking black and white photography will stir even the most jaded of passions.

I appreciate Knight’s work on many levels. Being a fan of rope bondage myself, first and foremost, there is the beauty of the craft of the work. The patterns in the intricate layers of twists and turns of knots and ropes take real skill. So does the art of suspension which is not as easy as it appears. Knight has taken traditional ideas of rope bondage and brought them to an entirely new, modern, and creative level. In his creations which are suggestive of metamorphosis, the rope seems like an extension of the personality of the creature within, almost like a fingerprint. The figures appear languid and waiting, content in their bondage, patiently suspended and on display.

And then there is the photography and the overall compositions to enjoy. Knight’s work isn’t just about the rope; it’s also about the setting and the context. Great attention is paid to the tactile qualities of the surrounding materials- wood and brick, for example, which compliment the tactile nature of the rope. The backgrounds are also carefully manipulated to showcase and enhance the figures and arrangements. The starkness and simplicity of the settings contrast with the intricacy of the ties, drawing emphasis to the detail while also highlighting the quality of isolation of the bondage. While there is much more I could say about the work of Garth Knight and why it appeals to me, I think I’ll leave it there and simply suggest that you go see for yourself. 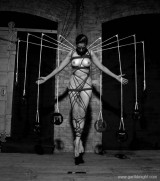