You are at:Home»Adult Games»Sexual role-play in Venus Rising
By Luca on May 23, 2014 Adult Games

Role-playing in computer games is something a lot of people enjoy and it happens in most of the popular online games. It can be hard to find though. Role-players are often a more or less hidden group within these virtual worlds and organised in guilds or at certain locations.

Role-play can have many different forms. Usually it’s assuming you are the character you are playing. You interact with others and the world as that character would within his or hers fictional background and imagined character. Players can do just about anything, hang around in a bar, go to war together, play out murder plots or just pretend to run a shop.

So what about sexual role-play?
Wouldn’t it be somehow logical that your fictional character has a sex life? Well, yes and no. Almost all online games out there don’t really support anything remotely sexual, through animations or other forms of character interaction. And most blockbuster mmo’s are played by adults and children and it’s impossible to know the age of a person inside the game. Obviously this would be an unhealthy and unwanted setting for sexual role-play. It does happen though, even in a game like World of Warcraft. And it’s usually done by people that know each other from within a guild and it’s done entirely in chat. So it takes a lot of imagination. 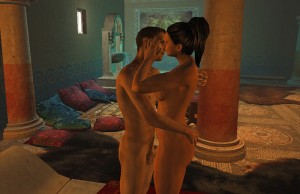 Venus Rising
This game is currently in development by Foxysoft. It’s set in ancient Rome and it promises to be a full featured MMO with all the bells and whistles. The game is currently in Alpha and last week I had the change to play the game and explore it a little, including a quick visit to the local brothel.

The basics are already there. A small town with some temples and a local market. There are the usual quests, some bandits to slay and some characters to interact with. The big deference with “normal” mmo’s is that it is really intended for adult gamers, sex included. So if your tired of fighting bandits you can sell your loot and use those coins for some flesh on flesh action.

I’m not going to talk about the game graphics or gameplay that much at this point, the game is still in Alpha and many things will change. However for adult role-play this game might have what it takes. I really hope that can pull it off and make this game as fully featured as the company is promising us.

For people that are not really into fantasy or historical mmo’s and are looking for a more contemporary game to play, Red Light Center might be something for you. Red Light Center is not a typical mmo, it does however give you the tools to create a character and interact with other players in many ways. And yes this includes sex in all it’s diversity. More information about this game can be found here.