You are at:Home»Adult Games»Strip Kittens 3D
By Luca on August 23, 2009 Adult Games

The idea is both simple and entertaining. Select a girl and let her strip for you on your own music ( your collection of MP3 files stored on your machine ).

The setting of the striptease act is exactly what you would expect, a darkish nightclub with some psychedelic colors here and there. When the first version of Strip Kittens was released it was quite something, the “moves” were realistic, the whole “3D thing” was hot, and there wasn’t much competition in adult games out there. The game had it’s place in the spotlights for a while but started to looked aged very fast.

When I got an email from the developers of Strip Kittens that they redid the game, based on the same concept, I just had to give it another try. The graphical update is exactly what your would expect. More detailed characters sets, this includes clothing and hair. A more vivid environment with a better usage of light effects etc… The “gameplay” and options are untouched ( select the girl & music and let her strip, and to speed things up you can manually remove clothing ).

Is the game worth your money? Not an easy answer. You can download a free demo and then you need to buy the girls. One by one. The standard game with one girl is $ 19.99, and from there you can “upgrade” your game with new girls aka $ 10.00 each. I really think thats a lot of money, they should have been more generous with the “girl sets” and gave more women to start out with. However, it’s fun to watch the girls do their acts on your own music, in the end Strip Kittens is still a simple and entertaining concept. 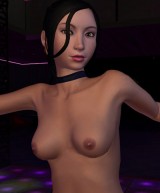