The Druuna album was first released in 1987 and did strike lovers of this erotic genre right in the heart. The drawing quality was awesome, and the comic album featured sexual explicit sex scenes in strange lustful fantasy worlds. At the same time the market of comics that started in de early 70′ was at it’s peak. The world was flooded with comics like superman, the x-men and many others. It was time to entertain this warmed up world with Druuna. The drawing style of this album was clearly related with the general comic style at that time. But Serpieri’s technique is of a more free and artistic nature. A large part of the action and suggestion is a result of his free drawing hand and sometimes chaotic style. It gives his albums the typical Serpieri taste.

The comics of Serpieri are among the classics of sex comics and I would really recommend lovers of this genre to start absorbing the great imaginary worlds in the Druuna series. 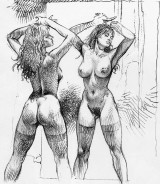 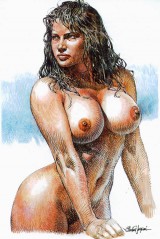 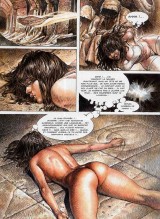 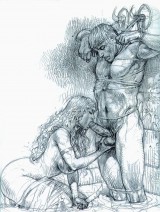