How would you personally describe the nature of your art?
If I would choose a name, I’ll call it ‘Fantastic stylized realism’. Described as imagining and rendering things that don’t exist, in a way that show them as if they could- creatures, characters or ambients that have the right to be depicted. They are not responsible for not existing, so we are here to put them into the light. About the stylization, I see no use in copying subjects to their minimal details, as done in photorealism, just to impress the viewer or to collect fans. I prefer to play around with shapes and proportions, to give an extra quality to the pictures. For example, I prefer to draw voluptuous, short height females, as opposed to the current tendency of long limbed ones. At doing this since some years ago, I have been told that my style is distinct when compared to others.

What do you consider the main inspirations for your work?  Are there any particular artists or styles that you connect with?
The female above all is my main inspiration. I don’t find any other subject as interesting as women. I think that we pinup artists are following the tradition of ancient or even prehistoric ones. From that point of view, my girls are just modern fertility symbols! I started admiring Boris Vallejo when I was a teen. I thanked him for me being allowed to have semi-nude female illustrations in my bookshelf. In those days I thought he invented the thong bikini! When I studied graphic design at college, I discovered Heavy Metal magazine and that changed my world, as if a really big window was open. Those European comics artists -like Bilal, Moebius, Druillet- or working in the fantasy/sci fi market -like Juan Giménez or Richard Corben- were the ones I studied a lot, as well as Frazetta, the originator of the genre. Also HR Giger is one of the artists I admire most.

What you biggest artistic frustration, or main struggle in your creation process?
I always struggle with body proportions. I need to practice a lot to keep my drawings proportional. Even then there are times when, for example, after a day or two, I discover that oh no, a pinup girl’s head is too big. Hands and feet will always be a mystery for me- asymmetrical, with all those fingers, who designed them that way? I’d like to make a complaint! My artistic frustrations are the usual among artists in many places: lack of social appreciation of artistic labor -that means erratic income-; being forced to find alternate work activities to survive. In some cases, lots of publishers demand us to mimic styles of successful artists in order to get hired. “Need a penciler capable of emulating (insert name here)”. Since I was at college I opted, encouraged by friends and fellow artists, to develop a unique style as one of my main goals. It is sad that some entertainment industries like comics discourage originality, moved by fear of risking their investments.

Can you explain something of your process that takes you from idea, to sketch, to model?  How many sketches of a particular figure might you do before deciding which one will become the model?  Do you have many characters drawn that haven’t make it to model?
Sometimes I start from a particular pose- others, from a scene or situation. I do a sketch, in small size, sometimes very detailed. From there, I can do a series of similar or alternate options, as if just one drawing is not enough. Then I usually put them to rest a few days. After that, I choose one or two, those that I like more, to be rendered as final pieces. In a final drawing, I tend to modify or elaborate more on those parts that need to, -costume, for example-. References are used at this point. For me, photographs of hands and boots are very useful. Those sketches are filed, but occasionally, very old ones manage to resurrect. A gothic Lolita I am doing at this time was first drawn in 2004. Some recent pinups of my pay site are from 1992!

Is there a website you think is relevant to your work, or is generally interesting?
I visit a lot CG Talk forum –from the CG Society, as well as Concept Art.org, where I find inspiration, resources and tutorials. Other preferred sites are The Drawing Board, where we can find really cool samples of stylization. Another site is bellefree.com, of fine pinup girls; although the site is not very updated. I really want to know more about an artist named Brynmr. I recently discovered Process Junkie, the blog of artist Alberto Ruiz, a master at drawing female form. 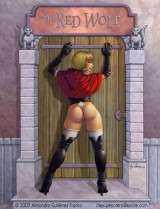 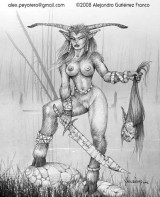 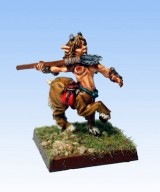 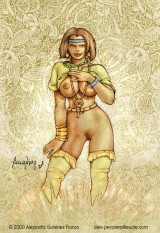 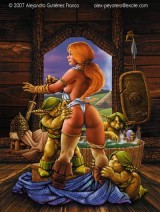 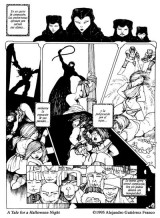