You are at:Home»Fetish Art»Blood Weaver
By Luca on June 19, 2006 Fetish Art

I would consider Nick Kushner a nearly traditional surrealist, visualizing his inner self, his spiritual thoughts and sexual drive. The one thing that gives his work the ultimate personalization is the usage of his own blood. I’m not sure if this aspect does that much visually, I guess I have to see the works in real, but it surely intensifies the symbols and theme’s he is using. Like in the drawings called “Love devouring itself” and “L’age Noir: The birth of the syphilitic Venus” in the last work he even used menstrual blood in the creation process.

Nick Kushner about the usage of blood in his art: “Using blood as a medium has been part of the ethos of my work now for close to 8 years. I generally acquire it from my chest, with several incisions and “milking” the wound throughout working on a pieceÃ¢â‚¬Â¦” “It’s a very cathartic process and is my way of literally inserting myself into my artwork but, far from self destructive, it’s intended to create balance by using blood as a medium of pouring emotion into a piece and creating as opposed to destroying, which might be a common misconception. “

The usage of blood to create an artwork is not new, the concept is excellently described by Dawn Perlmutter, University of Pennsylvania in his article ‘The Sacrificial Aesthetic: Blood Rituals from Art to Murder’. Nevertheless, the way Kushner uses it, together with his image weaving is unique, visually strong and disturbingly beautiful. 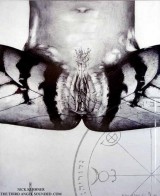