Egon Schiele was an Austrian Artist who died before he really had a chance to live up to his potential but was prolific in his artwork and controversies during his 28 years. A protege of Gustav Klimpt, one can see similarities between the two artists, but also the differences. Schiele’s work is emotive and vibrant and very much alive. The distortions in the bodies serve to enhance their vibrancy and suggest movement, emotion, and life.

Egon Schiele is known for his interest in prepubescent girls, getting thrown out of one town for behaving in a way that offended the locals, and arrested in another for seducing a girl younger than the age of consent (which was dropped and replaced with a charge of displaying pornographic images in the presence of children). He is also known for being arrogant, egotistical, and narcissistic. These qualities make him objectively interesting or even illicit as a character, and somehow one can perceive that grittiness and conflict coming through in his works.

Upon close inspection, the nudes that Schiele paints are not necessarily representational of physical beauty. Bones protrude, bodies sag, and muscles bulge- the colors and hues are exaggerated like the figures themselves. All of this manipulation doesn’t detract from the subjects; far from it- they are real and fragile even in their exposed fierceness. It is the intimate humanity that Schiele manages to capture which is so expressive and tangible that it’s hard to imagine that these paintings or these people existed almost 100 years ago because they seem so immediate and understandable today. 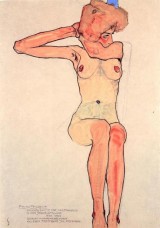 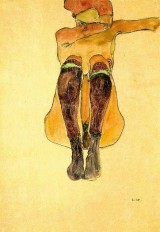 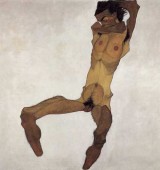