The Ecstasy of St Theresa
To start a series of articles about historical erotic art with this Catholic artwork of Bernini, seems strange. But it is a good example of an functional religious artwork with a strong sexual aspect. The Ecstasy of St Theresa was originally intended for one of the chapels inside the Vatican, but when it was nearly finished the Pope thought of it as to explicit, to sensual. So he decided to put it in a minor chapel outside the Vatican, the Cornaro Chapel. It was not the nudity that was the problem, the whole Renaissance part of the Vatican is full of nude statues and paintings, it was the sexual ecstasy of the body and especially the face of St. Theresa.

Bernini just followed the description of the vision St. Theresa had. She describes her experience in rather sexual terms, here’s a free translation of her vision. “In his hands he had a large golden Spear and at the end of his spear was fire. With this spear he entered my body. When his spear was pulled out, he left the fire of God inside me. The pain I felt made me groan, but it was also sweeter then I could ever imagine. It was mostly spiritual, but the body had a mayor part in this experience.” I guess Bernini used this vision as an opportunity to create an erotic piece of art, not an easy thing to achieve in this religious dogmatic period. Sexuality was not something considered decent or good, it was a necessary part of human life restricted to a married couple, and you’ll better not enjoy it, and surely not display it in public as art. 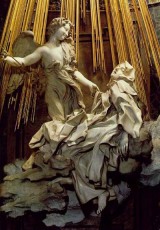