According to the story, there are multiple versions though, Leda produced two eggs, the twins Castor and Pollux hatched from them. Other versions of the story are replacing Jupiter with the god Zeus, and putt Helen of Troy in one of the eggs.

In most paintings the moment of copulation is shown, in a few we see the swan approaching and seducing Leda. The theme was especially popular during the Renaissance and Baroque period, from an artistic point of view perfectly understandable. It’s an excellent opportunity to display the female nude in full glory and the Swan gives it a very dramatical touch. But it remains strange that these rather explicit images were created during these periods, remember the church was still in charge here and the ‘Freedom of mind’ was just emerging.

Besides the nudity shown in these images, and the view of an aroused Leda, the concept of bestiality must have caused at least some moral discussions. Biologically spoken the Swan is not only chosen because they are beautiful large birds, they are in fact the only bird with a penislike organ.

The art shown in the gallery starts with an ancient Greek example, part of a temple fries. The second image is from Rubens a Belgian painter from the Baroque period. The third piece in the gallery is from Salvador Dali and the last work is from a Russian artist group called AES. 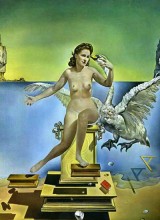