An article on National Geographic, about naked sports in the Greek world, made me wonder how nudity was embedded in the classical culture. I know from my art history background that especially the Greeks admired the naked body. They thought of it as a symbol of the strength of Greece and also as a representation of the gods.

But were all the Greeks running around naked, and was it normal to do so? Well some answers are found in the mentioned article and we also know that the nude body was not as hidden as in these days, well generally speaking. It was quite normal to go to public bathhouses for example, and as the article about the ancient Olympics reveals to sport naked.

But I think it’s kind of a misunderstanding that nudity was normal in every day life. The Greek art, especially vase decorations, show a lot of nudity. But remember that on these decorations mostly the gods and athletic figures are represented, not regular people. We see the same thing in our Renaissance period, a lot of nudity in paintings, even in the Vatican itself. And I can assure you that they are not running naked over there all the time. At least I hope so :-) My guess is that the Art of the classical period does not tell us that much about the subject. And the great writers were to busy working out their visions of the world to wonder en tell us about ‘normal’ people. 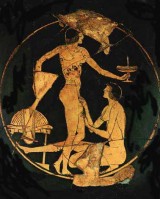