Leonardo da Vinci was not only a gifted artist and inventor, he was also an observer and scientist, studying the human anatomy extensively. His anatomical studies, often commented by himself in text or in small drawings.

Were mainly created when he got permission to dissect human corpses at the Santa Maria Nuova in Florence. Da Vinci is known for his accuracy and many of his drawings are still used in anatomy lessons.

Most “safe” anatomical studies show us the human body as we know it today, but when it comes to sexuality we see a few errors. In a way understandable, when you cut trough a human body, and don’t know exactly how all things work, or how they are related, a mistake is easily made. That could be one explanation, or was it a religious and social choice to visualize sex this way? Keeping the drawing “correctly” to please the public opinion and the church? Guess we will never find out, but it’s interesting that even in these images of science, we see cultural ideas reflected.

When you look at the male in the image, the cut trough drawing of the love making couple, you see the urinal tube connected to the spine. This was thought up by Hippocrates, a Greek doctor that lived about 400 bc, who’s ideas were still very popular in the Renaissance. He thought that semen came from the male’s spine, and from there it was transported to the penis. A second concept came from the church, semen was good, and urine was bad and polluted. So we see two tubes inside the male body, one delivering the semen, from the spine to the penis, and a second one delivering the urine from the bladder. The two couldn’t mix up this way, good and bad nicely separated, just the way it was mend to be. 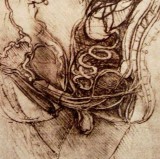 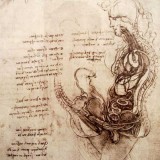 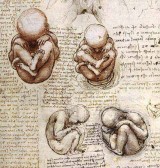 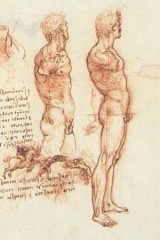