Lynn Paula Russell is an artist who is probably better known publically for her fetishistic related art. She has illustrated many books and magazines and has also produced strip cartoons.

Her popular images tend to be realistic- mainly illustrated in simple black, white, and grey- the figures do not seem too over exaggerated.

Often when considering aspects of the body, we look at unusual ways in which a body can be placed or engaged. It is less common, though no less interesting to envision the body transformed into something else. I find these sorts of optical illusions appealing- there is something playful and clever and engaging about them. Russell says that these explorations represent more of her ‘personal’ work and interests. I can only hope that she pursues it further in the future- I’d love to see what else she can imagine! 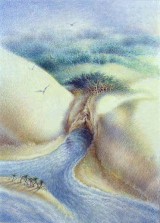 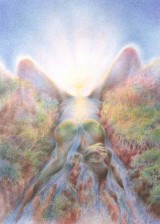