You are at:Home»Fetish Art»The Fetish Illustrations of Peter Bratt
By Luca on March 11, 2008 Fetish Art

Perhaps it is also due to some of the colors used or the backgrounds and settings of the figures. Or perhaps it’s just that the images are themselves, very stylized. The figures are purposefully posed and somewhat rigid which creates a separation between the viewer and the subjects.

His subjects being all women dressed in some element of fetish. Corsets, stockings, high heels, and boots feature prominently as well as the shine of either latex or rubber (it’s somewhat left to the viewers imagination or preference). The women are typically strong featured and some are not always what one would consider to be stereotypically attractive. Some of the features come across as almost masculine which raises a question about whether or not this is an intentional element to the interpretation of the art.

Although the women in Peter Bratt’s work are often looking out to the viewer, there is a distance that seems impossible to get past. In some ways the women themselves become as fetishized as the clothing and accessories that they wear. To me, this makes the women an object to admire or covet, but not to truly possess. While they may engage with one another, they remain inaccessible to the viewer. Like a strip club perhaps, where the onus is to look but not touch, so too are the women of Peter Bratt. 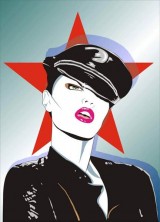 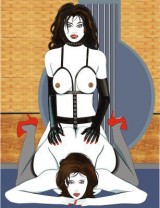 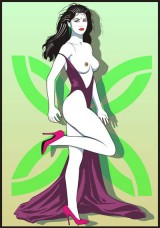 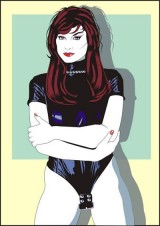 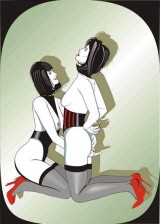 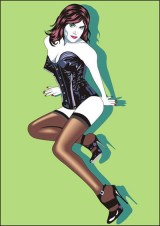