The idea of labeling the human body itself as an artwork is not new. The concept started it’s ( more or less successful ) journey in the late 60’s of the past century but became more famous by artists like Gilbert and George and Joseph Beuys in the early 80’s.

From the beginning nudity was a theme in this form of conceptual art, just as a way of chocking the audience, but sometimes the usage of the naked body had more depth and it became an intrinsic part of the work itself.

Personally I never really liked these performances, to vague and elitist for my taste. However when I first encountered a living sculpture ( I think it was in the Museum of the Hague ) I was intrigued by the nude woman sitting on a pedestal within the serene white setting of the museum. Somehow the body became something different, yes a sculpture of some kind. I guess the context changes your perspective on things, including nudity.

And in these works of art thats more then enough. The concentration, the torso and the way it reflects the light, the composition in relation with the room it’s in. A balancing act of a delicate nature, very, very impressive! 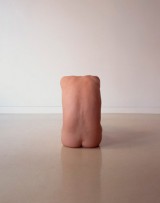