The ‘Image Machine’ shifts between virtual worlds and the one we accept for real, his work is commenting our western culture and ‘pretended’ common values. But above all it’s an experiment, artistically, technically and socially, often light hearted, underneath sometimes deathly serious.

The Last Supper
This image shows a remake of Leonardo Da Vinci’s Last Supper, not the first attempt to revive the original, but nevertheless an excellent one. I really like the political and cultural statement that’s made here, besides it’s marvellous blending of 3D rendering and photography, which is nicely documented on the website of the Image Machine.

A few quotes: “I’ve copied it, with a few variations of my own, the models in the places of Jesus and the disciples represent individuality, particularly sexual self expression. The apples are untouched – we have forgotten to take knowledge. The Divine figure is blinded and cuffed (standard practice at Camp Delta) representing censorship.”

And about the portraits on the walls: “Osama and George: What we are told (from opposite but remarkably similar doctrines) is true, moral, ideal, admirable…”

I can only encourage people to read the full story, this background was the main reason to show this image on our site, usually I’m quite cautious when religious subjects and erotica are combined or visually commented. Often the usage of religion or religious leaders within erotica is done for the shock effect, or to intentionally step on people’s toes. But this time the whole scenery and symbolic references are very convincing, besides it’s respect for the original’s intentions. Image Machine’s concept, playing around with a virtual magazine ( to make things even more blurry ) and it’s flirtation with fetish and glamour, is quite unique. It shows galleries of nudes, mostly photo montages within 3d rendered scenes, and almost classical pinup images. But underneath this erotic and latex feast there’s a more political and critical tone noticeable, presented in a humorous and glossy package. 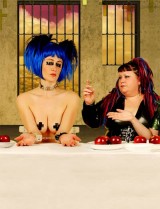 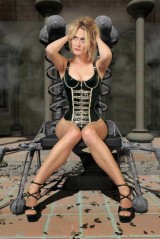 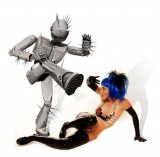