This is one of the reasons his work was often criticized by the public, and even exhibited behind curtains. The decorative and sensual art of Gustav Klimt is certainly the climax of the Jugendstil in Vienna, maybe even of Europe. His combination of academic painted nudes, loaded with symbolism and ornamental structures is incomparable and a great inspiration for future artists like Egon Schiele and Oskar Kokoschka.

The work Danae also has reverences to an other great mythological story, the one of Leda and the swan. In this story the god Jupiter comes down as a swan, the only bird with a real penis shaped organ but that’s biology I guess, and has sex with her. That this story of Lada comes in mind with the work Danae is mainly because of the pose of the female, in the past this pose is often used to visualize Lada, and now Klimt use it to create this masterpiece of sensuality. 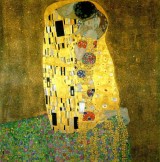