With basically the same religious function and background. She is often referred to as the Goddess of Love, especially when she is displayed with her son cupid and her beloved Mars, the God of war.

Venus was born from the sea, that’s why she is often visualized inside or surrounded by shells, and the daughter of Zeus and Dione ( there are more versions of her origin, but this one is most often mentioned in Greek/Roman mythology ). She was the most beautiful of all women, and when she walked upon the land, flowers emerged from the sand. She had many religious functions, she was the goddess of Love, beauty and fertility, but she was also used as a mother figure, protective and caring. There is no direct connection between the Roman Venus and the Christian mother Maria, would be quite impossible to mix a sensual and sexual being, with the eternal Virgin. But the images of Venus did provide the early Christians with the base material to shape their most important female character.

The Goddess Venus inspired many artists during the centuries. Greek and Roman artists were obviously sculpting images for religious purposes. But in later times she was still displayed very often, like in the Renaissance or Baroque period. One of the most beautiful images of Venus comes from the Renaissance master Botticelli. His masterpiece “The Birth of Venus” ( image nr. 2 ) shows the goddess blown towards shore by the Zephyrs, allegorical figures of passion. The figure on the right is Horae, a seasonal deity, offering her a flowered cloak.

A more recent artwork is “The Venus of the Rags” ( image nr. 6, created in 1967 ) from the Italian artist Michelangelo Pistoletto. In this case not her beauty or mythological function is represented, but she’s used as a symbol of the old established artworld, facing towards a new era for artists to explore. An other well known artwork is the “Venus de Milo with Drawers” ( image nr. 1, created in 1936 ) by Salvador Dali. It shows a copy of the original statue with drawings and fluffy grips attached to it. Dali uses the Goddess in his work quite often, as a sexual symbol or the ultimate female seducing men. Even today there are many artists using the figure of Venus, sometimes they use her old function as a sexual and loving Goddess, often she’s a mixture of old and new (personal) meanings.

Check the link section for some interesting artworks, mainly from contemporary artists. The gallery shows some well known images of the Goddess, mainly from Greek, Roman and Renaissance artists. 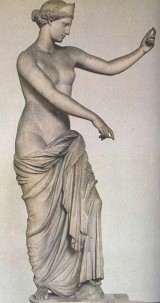 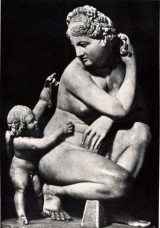