The work of Jonathan Canady has been bundled in the limited edition art book “Dangerous Meat”, all copies are sold out, but the last one is now up for auction at Ebay.

Bids are starting at $0.99, so if your a fan of his art, be swift. The auction ends later today. Either you are going to be amused and entertained by the work of Jonathan Canady or you are going to be offended. There isn’t really an in-between. Canady’s stark images of mutilated zombie figures engaged in sexual activities and spouting blood is meant to grab your attention, one way or the other.

Canady is a musician as well as an artist and the link between the two is palpable. The graphic nature of his art is reminiscent of album covers or biker-gang jacket emblems. You could imagine stickers in lockers or on notebooks screaming ‘sex and death’. Like some sort of secret club, either you get it and are in, or you don’t and you’re out.

But beneath the shock value there is a real eye for graphic illustration. The way the outlines of the bodies are depicted with dark and heavy jagged lines adds to the edgy quality of the subject matter. To illustrate how the technique impacts such deceptively simple drawings, all one has to do is look at the smooth line example, where the zombie becomes an alien. Then there are the bright red drips and splatters whose organic free forms contrasts with the controlled tightness of the black lines. Still, no matter how much you look at the technique, you aren’t going to be able to escape the subject matter. The one thing I will say for Canady, whether you like his work or not, it’s guaranteed to make you feel something- and that’s no small feat. 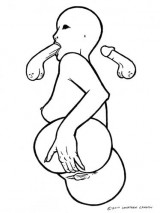 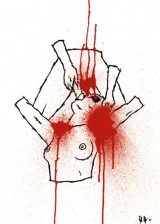 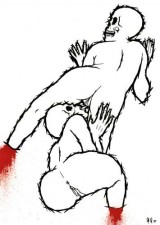