You are at:Home»Nude Males»Erotic Stained Glass by artist Tolomelli
By Luca on July 12, 2007 Nude Males

Stained glass is so connected to religion, especially churches and images of religious figures, is there a symbolic relation between those works and your erotic glass pieces?
The connection with religion and stained glass was one of chance. Originally stained glass was invented as a solution to a technical problem. Back in the Middle Ages, the only way to produce glass was through mouth blowing and it was impossible to create large expanses of glass. Stained glass was used in churches and private residence with a basic rhombus pattern (quarries) and lead was used to join the pieces of glass together so they could covered a large window opening. Later, colors and painting were used in stained glass. The church used this opportunity to create images that communicated its religious messages to the illiterate masses. The same iconography that was used in religious paintings was used in religious stained glass. Stained glass does not belong uniquely to the church; although, the church was by far the largest patron. In medieval times, castles and important residences used the same technical solution to covering their big windows and here with the advent of colors, heraldry (coats of arms) and profane images (Mythology) were widely used.

Can you describe the creation process of a piece, like The Kiss? In both subject and form?
The Kiss was inspired by a photograph. The initial part of the process involves choosing how to cut the glass and where the lines of lead will go. As part of this process, where the glass needs to change color and how complex shapes are going to be cut, are worked out. This forms a cartoon. Next I select a mixture of mouth blown and machine made glass for different parts of the design. The longest part of the process is the painting. Once trace lines have been added and fired, it is the shading and detail that take up the time. With shading, unlike painting on canvas – where paint is carefully applied to the canvas – in stained glass it is roughly applied and removed carefully using a variety of different techniques. Each layer of shading is then fired at about 650Ã‚Â°C. Enamels are applied last because they have a lower fusing point.Next the glass is leaded up on top of the original cartoon, following the original lead lines. This ensures the planned lead lines are followed exactly. Once leaded the joints are soldered on both sides. This is the best of the process, for this is when you can finally hold up the entire panel and see it against the light. Finally, the glass and lead are cemented together with a special putty, making them weather proof for around 100 years. The window is then cleaned, brushed and polished and ready for fitting. Sometimes the panels are fitted in to a window or on to a light box or with some projects I work on, in collaboration with other artists, in to another structure.

What websites you think are relevant to your work, or a generally interesting?
The British Museum of Stained Glass It’s collection covers the evolution of glass over time, in one of the most important countries for this art form. 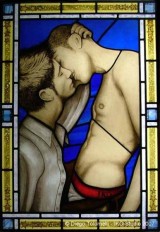 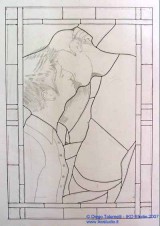 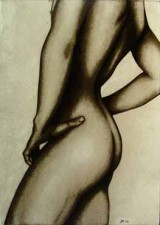 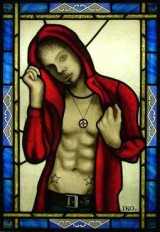