It’s this combination of exaggeration, and a sensitive usage of the paint, that gives his work the typical Fusby aura, besides the often ambiguous subjects. Like his tweaked versions of mythological stories, and his gay saints. I wonder how the general public in the United states reacts on this mixture of Christian religion and gay eroticism, would they think of it as offensive? In most European countries it’s wouldn’t raise an eyebrow, besides Poland maybe, where the conservative government seems to be pushing back public expressions of homosexuality. They are even investigating the “homosexual level” of the Teletubbies, and how that could stimulate children to become gay.

Anyway I’m getting a bit off topic here, but mixing religion with erotica, no matter what taste, brings up discussion, and that’s a good thing. Even when things are getting edgy, like some of Fusby’s paintings where a priest and another man are intimate, with all the resent priest scandals in de US quite a delicate subject.

But not all the art of Ted Fusby is involved with complicated or cultural tense issues, many paintings are “just” celebrating the male form and male love. At his website there is an extensive collection of gay art to enjoy, covering a large part of his oeuvre. 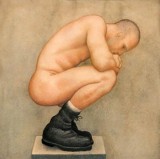 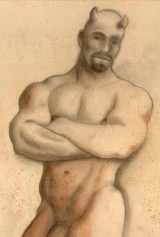 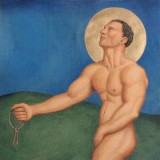 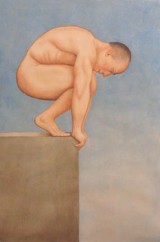 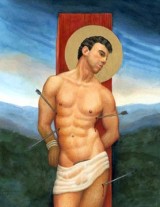