You are at:Home»Nude Males»Human Body Language
By Luca on March 24, 2013 Nude Males

The naked human body is capable of so may expressions and ways to communicate that it’s a never ending inspiration for many artists. The young photographer Ryan Pfluger is one of them and in his art the human body language is the primary subject.

From the vulnerable male figure imitating the crucifixion to the introvert photo of a guy dreaming on his bed. The setup of the scene is kept rather simple, but with such a refinement. His photographic approach never gets in the way of the model that is photographed. And it leaves a lot of room for the model’s own body language and personal expression.

The models he is using in his work are people that are involved in his personal life. Maybe that is one of the reasons that there is such a strong presence of the models character in his work. I can imagine that when you are using models you don’t know so well or that you are not bound with in a personal way the images would loose a lot of it’s intensity that is currently present.

Although some of the images of Ryan Pfluger could be labeled ‘gay’, well some images definitely are, the art he is creating is not limited to the gay scene or only interesting for gay people in my opinion. The way he is visualizing the human body and it’s language is strong and beyond limitations. 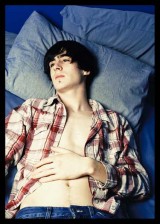