When we finally agreed about the game concept, during a long walk with my dog in the woods, it was time to create the first visuals. I always start sketching on paper, nothing fancy, just to get the flow going.

I draw the first characters, some environments, a few scenes and write my thoughts aside the drawings. This process usually takes a few weeks, nobody ever sees these drawings, they are just a way to build up my personal framework.

An other thing that’s really important for me in these early stages of development is surfing, thank God there’s the Internet. I collect loads of images, it’s slurping up most of my harddrive’s space, that’s for sure. These images will become my reference material during the whole creation process. These images are mostly people, interiors and clothing, but also structures and skins to use in my texturing work later on. Because most of the characters we use in our games will get naked at one stage or an other, quite a lot of these images come from ‘cough’ porn sites. Yeah my job is a real painÃ¢â‚¬Â¦

When the atmosphere, the visual concept, is build up it is time to communicate. Usually it’s like a ball game between me and the lead Programmer Steven. He always starts with terms like ‘impossible’, ‘Are you sure’ and ‘way to complicated’Ã¢â‚¬Â¦ usually, I must admit, he’s right about most of my twisted wishes. During these sessions we sharpen the concept again, and we repeat this process until we are both satisfied with the result.

Finally its time to start modeling, for me the best part of the development process. Things are becoming ‘real’ now and the first boxes your draw feel like the birth of a new game. The first character I worked on was Lisa, a voluminous young woman from the early ’30. Everything on her should be a little bigger then life, but sexy though. The hard part was to give her those large breasts and peaches without making her grotesque. The pose she’s in is needed for further processing, like rigging and weighting, at a later stage.

In the gallery you see the modeling stages of Lisa, after this she’s will get some baked shadows and bones to move. 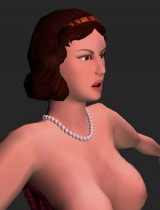 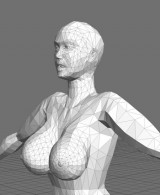 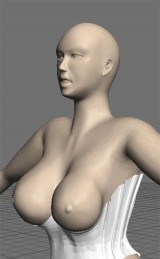