This creative brain absorbs his environment, from Shunga, kinky nightlife and pretty girls to television programs. Then he starts tinkering with this visual information, bending it towards its own wicked and wonderful destination.

Jason Levesque’s work covers a wide array of subjects and media, but they all have that typical sense of humor and playfulness.

But labeling his work humorous is only part of the story, in many of his images there’s much more to explore. Some images are damn sexy, while others provide a more morbid experience. Death, fetish and angry fluffy rabbits, it’s all eagerly combined with the stroke of the digital pencil. Many of his drawings are based on his own photographs, there’s quite a collection of these “originals” on his website. Although there are some pretty pictures in there, they don’t have that vivid and unique atmosphere his drawings have. Nevertheless, it’s interesting to witness the creation process, the birth of an idea, resulting in one of those amazing drawings.

Jason Levesque’s work has been published in various magazines, exhibited in and outside the United States, and is published in a book called “Girls are Pretty”. Besides his free work he’s also involved with webdesign, flash and commissioned illustrations. When you browse trough his site, be sure to check out the “Toybox” where you can design your own girl, or dress up a paper doll ( Flash plug-in required ). 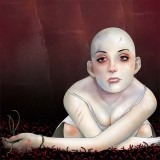 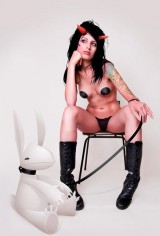 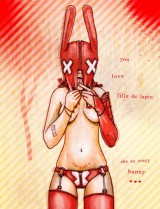 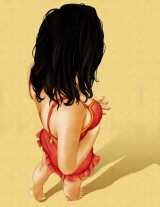 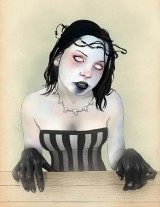