And what about the gun babe, just an other playful theme of his. Surely a diverse artist with one thing that’s always there. An ongoing photographic quality, an eye for beauty and a rather dramatical spirit.

The Gothic Lifestyle and Gothic Art

Personally I have a preference for his Gothic Art. The creativity that’s involved in the Gothic lifestyle is amazing. A mixture of historical, horror and fetish style’s and ideas. I come across quite some Gothic art photography and it seems that this particular subculture is greatly triggering the imagination of many artists. Maybe because the Gothic scene has such a large number of icons and theme’s to play with, and the dramatical style is obvious very usable to experiment with. The Gothic girl, or should I say Queen, in the gallery is a nice example of the richness of drama that’s involved here. A stunning strong image. An other dark themed image is the Blooded girl sitting in front of some sort of dentist chair. The contrast of the gallons of blood with the beautiful nude girl are making this image one you are not likely to forget.

Chad Michael Ward is also one of the photographers that worked with Diana Knight. I featured an article about her modeling work last week. Don’t forget to check it out as well.The Gothic art and nudes website of Chad Michael Ward 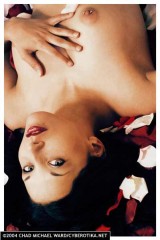